The American Girl doll company recently found itself pulled into a controversy over a meme that simultaneously poked fun at its brand and “Karens” everywhere. This image recently made its way to social media: 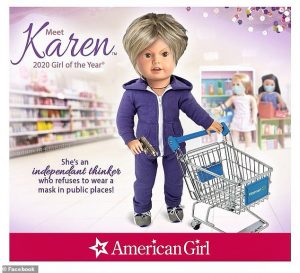 According to Dictionary.com, Karen is a pejorative slang term for an obnoxious, angry, entitled, and often racist middle-aged white woman who uses her privilege to get her way or police other people’s behaviors.

For readers not familiar with American Girl dolls, this explanation from their website, gives a pretty good summary:

The creator of this meme apparently felt “Karens” are shaping our country in a way that merited American Girl treatment.  According to this piece at boingboing.net, American Girl’s initial reaction to the post was to assure its customers that it would take legal steps to have the meme removed from the Internet.  But ultimately, cooler heads prevailed, leading American Girl to issue this statement:  “American Girl has no intention of censoring this parody meme and anything shared to the contrary was in error. We apologize for any misunderstanding.”

Given the First Amendment’s protection for parody, American Girl made the correct legal decision. And in practical terms, a protracted legal fight would have only kept the issue alive longer.

IS SUPREME COURT LEAKER A CRIMINAL?