CAMPUS SPEECH PART THREE – Is there a right to “non-offensive speech”? 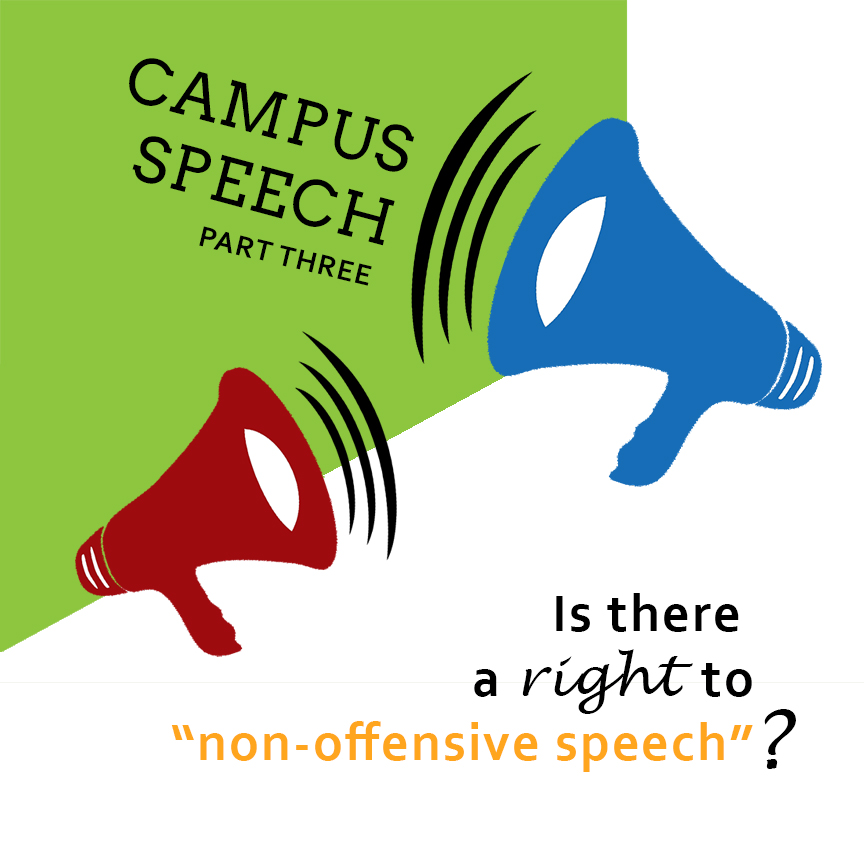 CAMPUS SPEECH PART THREE – Is there a right to “non-offensive speech”?

If I have posted this link once before, I apologize for being repetitive, but it likely bears repeating.  According to a Pew Research Center survey, 40% of millennials are fine with limiting speech that’s offensive to minorities.   That finding raises enough concern to warrant a recent panel discussion on the topic.

And it is a disturbing finding.  Having said that, let me be clear that I am in no way pro-bigotry.  I am not.  And I conduct myself accordingly.  But I don’t think I have the right, nor does the government (or a public university) to impose a “non-offensive” standard on anyone.  And I think that for a host of reasons.

First, there are protections for truly dangerous speech.  The government can sanction incitement to violence, “fighting words”, threats, and obscenity among other categories.  Speech that poses a threat to something more than one’s sensibilities is outside the protection of the First Amendment.

Second, who decides what’s “offensive”?  And will that line vary from campus to campus or state to state?  It seems like a pretty malleable standard.  And one that could inhibit real progress.  There was a time when the majority considered it offensive to advocate on behalf of inter-racial marriage, integrated schools or LGBT rights.  Had those voices been shut down in the name of preventing “offensiveness” would the progress we’ve made have been realized?

Third, there is some creeping overlap I think between offensive “speech” and offensive ideas.  With some notable exceptions in our history, our society has protected ideas pretty zealously.  The analysis for determining whether “incitement” speech can be punished provides a good example.  A speaker must advocate imminent lawlessness, that is likely to occur, to be subject to any sanction.  But advocating more generally the idea of a violent overthrow is protected.

But I think some of the folks who are concerned with offensive “speech” are mixing it up with offensive ideas.  Pick a topic – race relations, gay rights, religion – and you can find some ideas that  many of us find offensive, hateful even.  But the notion that a speaker could be prevented from espousing those ideas because the very act of doing so is “offensive”  is directly counter to our First Amendment tradition.

Offensiveness, along with stupidity, rudeness and a host of other annoying characteristics are here to stay.  Whether we like it or not.