Cutting Employees’ Hours to Avoid the ACA Could Cost You Millions 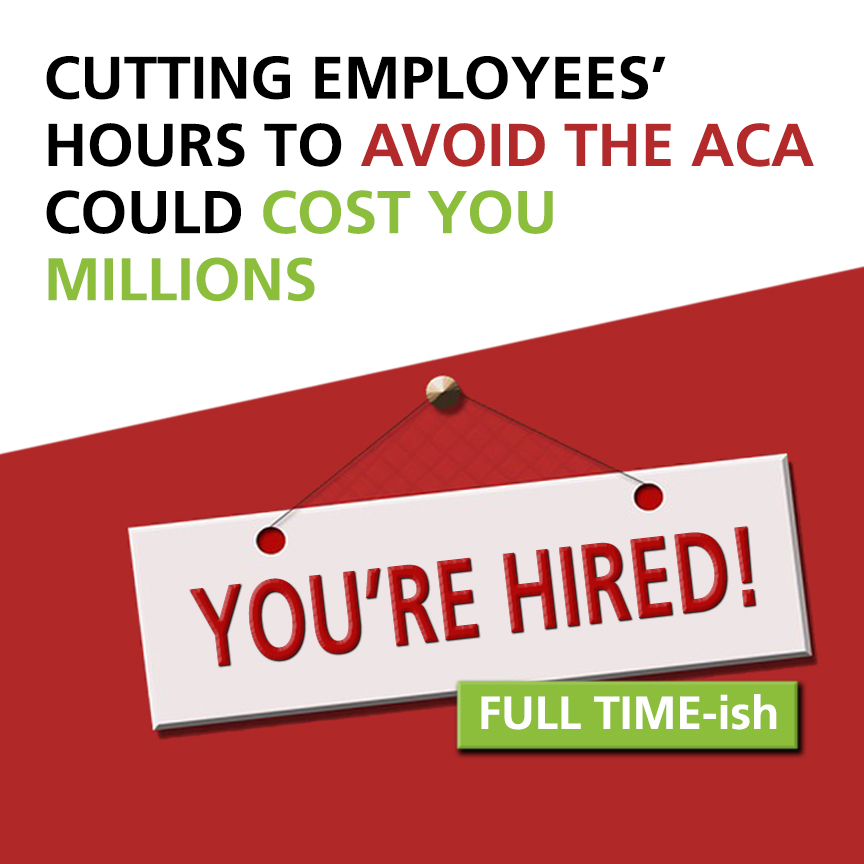 Cutting Employees’ Hours to Avoid the ACA Could Cost You Millions

Or at least it is going to cost Dave & Buster’s about $7.425 million plus legal fees.  When the ACA employer mandate first came out, there were many large companies in the news stating that they were going to cut employees’ hours to under 30 hours per week in order to avoid having to provide health plan coverage to those individuals.  As an ERISA attorney, I immediately cringed and thought defending an ERISA lawsuit could cost much more than the potential ACA penalties.  Within several weeks, many of those companies redacted their original statements, which I assumed was a result of their attorneys warning them that they could be hit with an ERISA lawsuit for interfering with an employee’s right to attain benefits.

You see long before the ACA was put into place, a provision was put into ERISA to prohibit any person from interfering with the attainment of any right to which a participant is entitled under a plan.  Therefore, cutting an employee’s hours in order to prohibit them from attaining a benefit would seem to be a direct violation of ERISA.  Unfortunately, Dave & Buster’s either didn’t get this call from their counsel or they decided not to heed the advice of counsel and take the risk.

In 2016, Maria De Lourdes Parra Marin, an employee of Dave & Buster’s, filed a class action lawsuit in a federal district court in New York alleging that Dave & Buster’s violated ERISA when it cut her hours down to an average of 17.43 per week for the purposes of not having to offer her health plan coverage. Previously, she was working anywhere from 30-45 hours per week.   One of the damaging facts alleged in the suit was that during a meeting at one Dave & Buster’s location, attended by Ms. Marin, a general manager said that the ACA mandate could increase the health costs of Dave & Buster’s by as much $2 million and to avoid those costs, the same manager claimed the restaurant planned to cut the hours of full-time workers.  True to the manger’s word, at some point after this meeting, the restaurant did actually cut the hours of approximately 1,200 of its workers.

After attempting and not succeeding at getting this lawsuit dismissed, Dave & Buster’s agreed to settle the case for $7.425 million.  The settlement was initially denied by the court, but just last week the judge preliminary approved a revised settlement for the same amount.  The new settlement addressed the judge’s concerns by allowing unclaimed settlement funds to be distributed to workers and by requiring Dave & Buster’s to change its employment practices going forward.

This lawsuit is the first of its kind as it relates to the ACA employer mandate, but I wouldn’t be surprised to see more cases being filed as a result of this settlement.  This settlement should serve as a cautionary tale to employers regarding cutting an employee’s hours to avoid the employer mandate.  Employers have the ability to choose to hire part-time workers.  However, this case seems to confirm that they are prohibited from reducing any employee’s hours in order to avoid providing health plan coverage.  If you are planning to reduce an employee’s hours, you should document a valid business reason for doing so and avoid any discussions surrounding a benefit of the reduction being the need to no longer offer health plan coverage.

Make Sure Your Health Plan is Affordable When Setting Premiums…