What’s the Difference Between a TTB Change in Control and a Change in Proprietorship/Ownership? 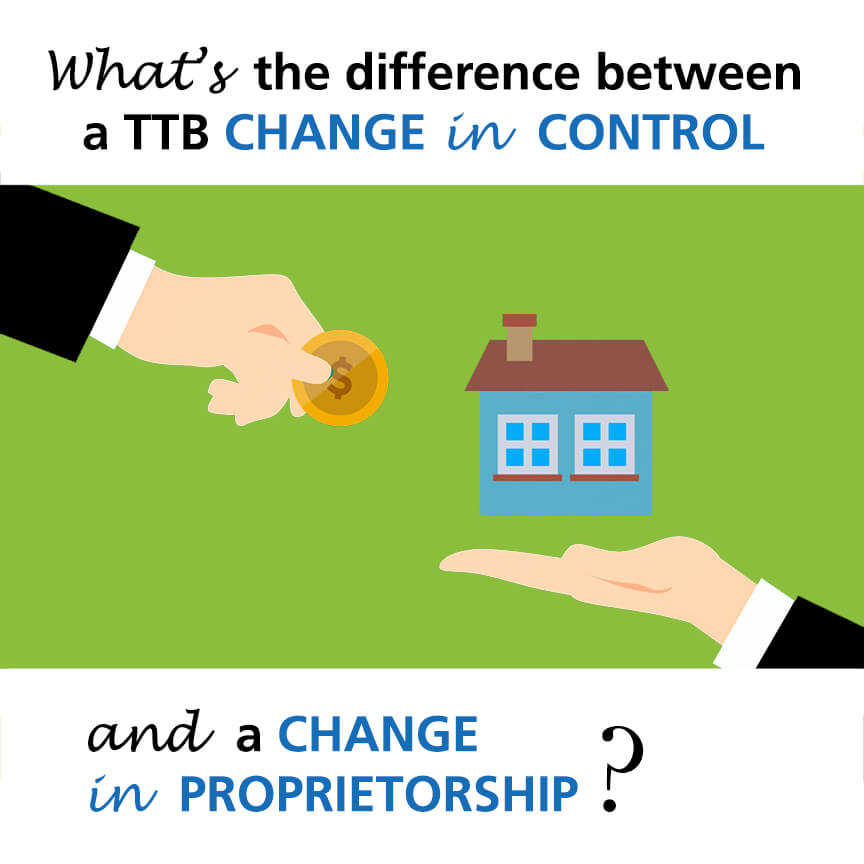 What’s the Difference Between a TTB Change in Control and a Change in Proprietorship/Ownership?

Change in Control vs. Change in Proprietorship/Ownership:

If you are an alcohol or tobacco industry member regulated by the Alcohol & Tobacco Tax & Trade Bureau (or “TTB”), you have likely heard the terms “Change of Control” and “Change of Proprietorship”.  But what is the difference between these two concepts?

According to TTB, a Change in Control “occurs when there are changes in stock ownership, LLC membership ownership, or possibly major changes in the corporate officers or directors of a corporation.”  Unlike a Change in Proprietorship which involves two legal entities, a Change in Control involves only one legal entity that experiences a change within that entity.  This means that while the people involved may change, the legal entity remains in existence before and after the change occurs.  Perhaps the best way to understand a Change of Control is to think of it as a majority share stock purchase, as opposed to an asset acquisition.  That is, the original business entity survives but control of the majority share has changed hands.

In contrast, a Change in Proprietorship (which TTB also refers to as a Change in Ownership) “occurs when there is a change in the legal entity which owns and operates the business.”  Again, this is more akin to an asset purchase and involves two distinct legal entities.  For example, XYZ, Inc. purchases ABC Distillery from ABC Corp, however ABC Corp is no longer in the picture.  In this case, a new Basic Permit or Brewer’s Notice is required, and under the Internal Revenue Code, a Change of Ownership means that the new owners cannot commence or continue business operations until all necessary registrations and permits are approved.  Failure to timely secure a new permit can result in automatic permit termination by operation of law, and even significant tax consequences, as small producer rates only apply if you have a valid permit.

For these reasons, we recommend consulting with an experienced attorney familiar with TTB related legal issues when planning to buy or sell a brewery, cidery, winery, or distillery.