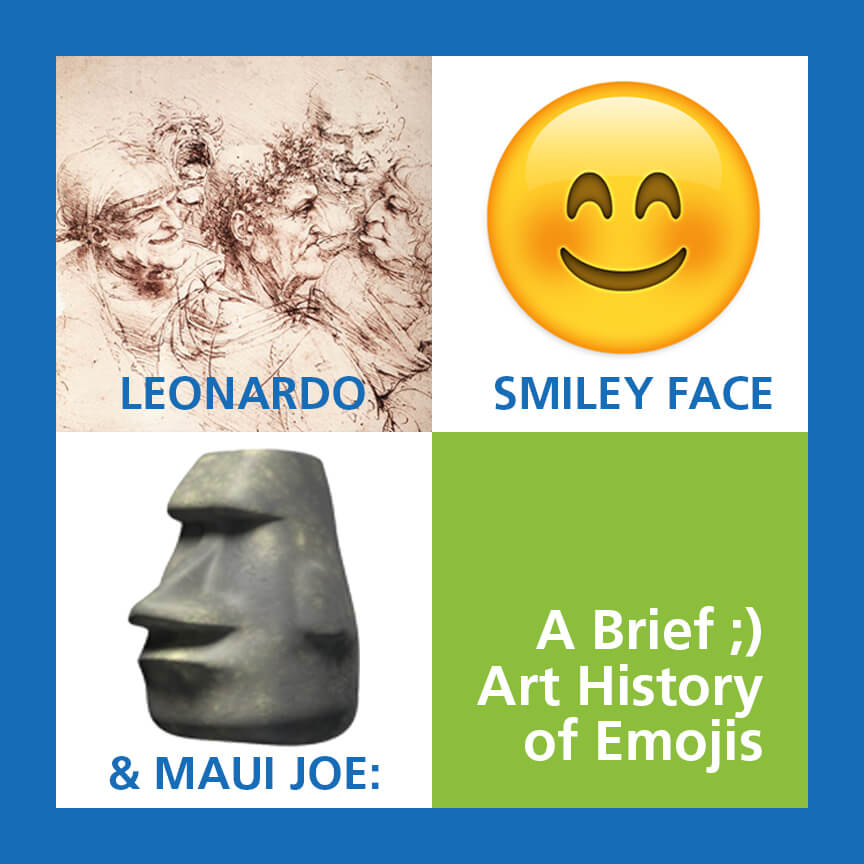 What do Leonardo and Emojis have in common?

Let’s open by noting the irony of writing words about visual symbols. But that’s nothing new in art history.  Big book narratives of the 30,000 year story of art use words, but there’s an inevitable shortfall in writing about visuals. An example is the latest of many biographies of Leonardo, a book by Walter Isaacson. The author uses a lot of words to describe Leonardo’s non-verbal, visual world, especially his genius notebooks of anatomical imagery. At times, Isaacson’s verbalizing is a slog compared to Leonardo’s visuals. I find myself going back to Leonardo’s paintings and drawings themselves.  Just look at them for a while. They speak their own meanings apart from the art historian’s text.  Leonardo’s lines, compositions, figures, facial expressions, images and colors have for centuries been pictures that decidedly speak more than a thousand words. That’s why our contemporary world is still intrigued by Leonardo, notwithstanding a lot of competing imagery in the 21st century Visual Age.

This points to an insight:  If words could say what pictures can say, or vice versa, then why need both? (Sub-in here for “pictures” other art forms like “song” or “architecture” or “dance”.)  Verbal and non-verbal modes of communicating just aren’t interchangeable. Think of one of your favorite songs. Maybe it has lyrics, maybe not. Chances are it’s your favorite because it appeals to you at an emotional level which you can’t fully describe in words.  Pictures are like music.  They speak in a language beyond words.

Leonardo was a genius at facial expression. His epic curiosity centered on the human figure, face and gesture.  He intensely observed, studied and drew human faces all the time wherever he was in his portable sketch book. He went below the surface, figuratively and actually. He dissected the human face and skull, drawing its bones, muscles, nerves, veins and arteries.  He was the world’s first best medical illustrator, a fusion of art and science. Mona Lisa’s smile is, centuries later, more than a smile because Leonardo could see the deep anatomy beneath her enigmatic expression. The Last Supper is, despite its eroded imagery, still one of the world’s greatest compositions of anatomical gestures conveying non-verbal spiritual symbolism.

Thousands of years before Leonardo, civilizations rose and fell around visual imagery. (Watch the new series Civilizations on PBS, for example. You’ll see.)  The ancient civilizations of every continent thrived on pictograms, logograms and ideograms. Some of our earliest  examples are from cave drawings, Mesopotamia, Egypt and China. Chinese calligraphy from its ancient origins to today is a fusion of image symbol and language.

This brings us to our Visual Age revolution where people across the globe are this very moment sending hundreds of millions of visuals per second over smart phones. The technology is 21st century. But the pictograms, logograms and ideograms have ancient origins. Emojis and emoticons have particularly interesting roots in Japan and China, cultures that were tuned into pictographic imagery long before the United States was born.  Like you, I have a bunch of prefabricated emojis on my iPhone. As someone interested in caricature, facial expression and portraiture, I think the jury’s still out on the quality of these little images. Just wait. They’ll get better.  The technology of customization will improve. No I don’t expect to see Leonardo-level emoji art. But who knows where emoji art will go?

Why emoji? Because words have never been enough for human beings. (Well, maybe except lawyers;))

Across the millennia, the human eye has been as seeking as the human spirit.

That’s why my favorite emoji on my phone is the Moai…that stone-carving head from the 13th century inhabitants of Easter Island. You know, those giant mysterious stone sculptures looking out over the ocean. I don’t know why Apple has included it, but I like it and so do my grandkids who call it “Maui Joe”. I’m not sure what the Maui Joe emoji is supposed to convey. But I like his unflappable stoney lookout from ages past into the Visual Age of my smartphone.

And my grandkids think he’s much cooler than Smiley Face.