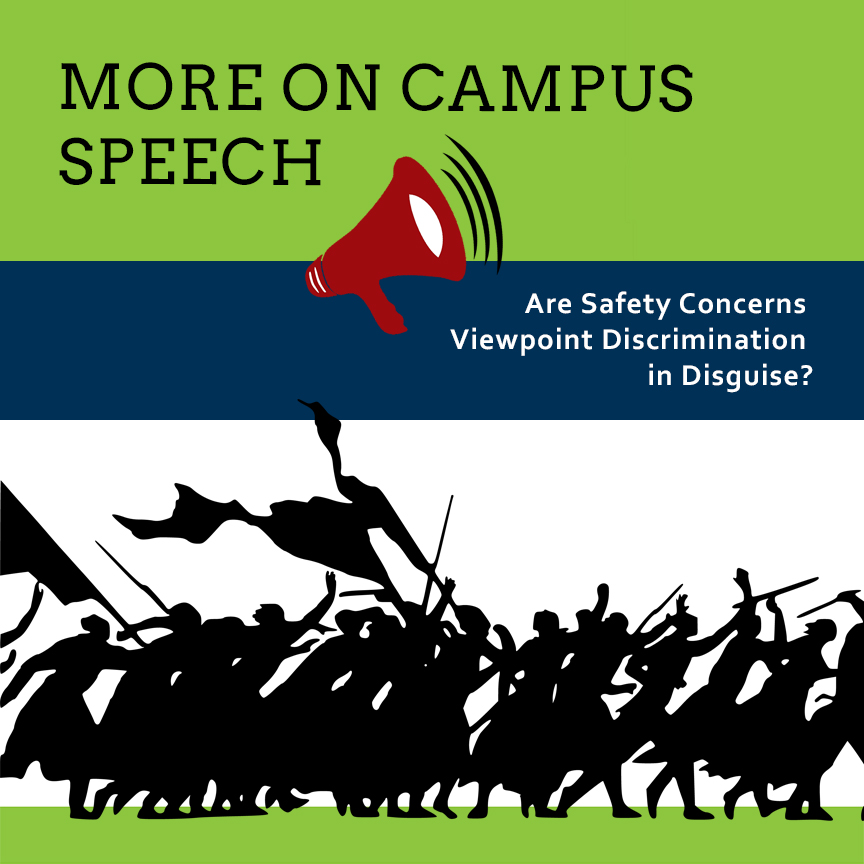 I came across a lot of material on the ongoing debate over campus speech.  This post will try to synthesize it all.

First is a blog post by my friend Len Niehoff. Len makes the point that it’s okay to be afraid of certain speech – in the sense that fear means concern for the consequences of the thoughts behind the words.  Some First Amendment absolutists have espoused the notion that there is no reason to fear ideas.  That may work as a platitude, but in reality, it has its limits.  To hear the maniacs in Charlottesville marching with Tikki torches and chanting “Jews will not replace us” and not be at least a little unsettled is hard to imagine.

But Len’s larger point is that acknowledging that some speech is scary doesn’t mean it should restrained.  I know people who are afraid to fly – but they board planes when they need to.  I would hope police officers have some sense of fear, because otherwise, I imagine there’d be a lot of reckless cops running around out there.  Dealing with scary speech, given the First Amendment, means something other than shutting it down.

Which brings me to this piece from the Ohio State University newspaper, “The Lantern.”  Apparently, OSU is refusing to permit white-supremacist (and leading contender to play Rolf in any remake of The Sound of Music) Richard Spencer from speaking at the campus.  The school is citing the fact that, according to a school spokesman, “it is not possible to accommodate this request without substantial risk to public safety.”  Coincidentally, Michigan State, Penn State and the University of Florida have reached similar conclusions.

Two pretty obvious statements here – 1. Spencer is despicable and 2. Safety is a legitimate concern.  But perhaps a less obvious point is this – restricting speech is not one of a handful of options to address a safety issue.  It’s a last resort.  You do it only if there is no other option.  Which means, if OSU needs to hire more security or take other less drastic measures, it needs to do so.  If I want my kid to avoid sunburn, I could lock him in his room all summer.  Or I could make sure he uses sunscreen.  OSU opted for the equivalent of the lock down when it should have used the sunscreen.

And the danger here is that “public safety” will become (if it hasn’t already) a really easy way to keep out unpopular speakers.  It looks like at least 3 Big Ten schools are headed in that direction.

Which brings me to the final piece – proposed legislation from two Ohio legislators that would limit state Universities from following OSU’s lead.  I don’t know if “knee jerk legislation” is taught at orientation for Ohio’s state legislators, but I wouldn’t be surprised if that were the case.  In this instance, Representatives Wes Goodman and Andrew Brenner would like to eliminate free speech zones, prevent universities from uninviting speakers because of “opposition or offense” and “allow those who feel their rights to free speech were violated to sue the university and its official in state court.”  The thing about this proposed legislation is that it is redundant.  The First Amendment to the United States Constitution and Section 11, Article I of the Ohio Constitution provide all of the protection this proposed legislation promises.  But the constitution allows courts to balance interests and make nuanced decisions.  The proposed legislation is more meat cleaver than scalpel.

Goodman and Brenner  both tout their small government, conservative credentials on their websites.  So it’s a mystery why they would feel the need to add on a bill when the relevant constitutions have it covered.