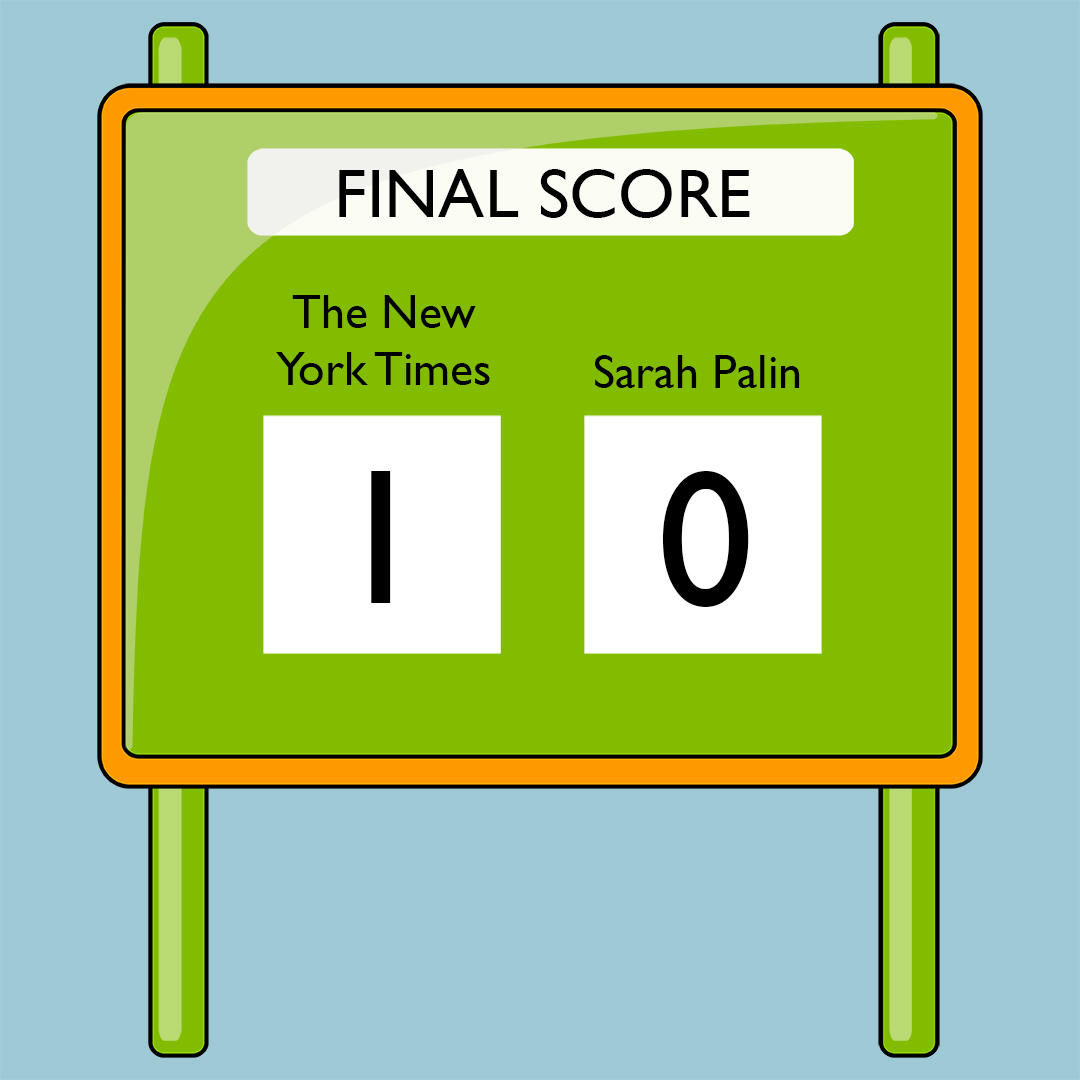 A federal court in New York (the judge was Jed Rakoff, a Clinton appointee for my curious readers) dismissed Sarah Palin’s defamation suit she’d filed earlier this summer against The New York Times.  The decision is final in that for now it disposes of Palin’s suit. She can appeal it, but she has time to decide whether she wants to do that.  So more to come.  But however it turns out, for me this decision has an important teaching point.

But first, some details.  The case concerns a Times editorial published shortly after the Washington D.C. shooting in June that included Representative Steve Scalise.  The editorial wondered whether there was a link between the heated political rhetoric and the shooting.  The editorial alluded to the Gabby Giffords shooting in 2011.  Around the time of that shooting there was reporting that a Sarah Palin PAC had, before that shooting, distributed a map showing various congressional districts in the cross hairs of a weapon.  The initial version of the editorial stated that there was a clear link between the map and the shooting.

Palin argued in her suit that long before the Scalise shooting, the notion of any link had been conclusively debunked.  So in Palin’s view, the editorial falsely stated there was a link, which constituted defamation.  But as a public figure Palin was required to establish “actual malice.”  That term has a specific meaning – a public figure plaintiff must establish that the author knew the information was false or that acted in “reckless disregard” for the truth or falsity.

The court concluded that Palin could not establish that the editor responsible for inserting the line about the Palin PAC acted with actual malice.  And for that reason, it dismissed the case.

The United States Supreme Court adopted the term “actual malice” in 1964 in another case where the New York Times was a defendant.  That case – New York Times v. Sullivan – is the seminal libel case.  The gist of that decision is that the First Amendment has to allow room even for inaccurate commentary about public figures.  Otherwise “robust debate” could be shut down by minutia.  The concept makes sense and has served all of us well for more than 50 years.  But I wish the Court had called the concept something else.

In this case, Palin argued that  “there is existing hostility toward Ms. Palin [on the part of the Times].”   The theory then, is that given the hostility, the Times is likely to make up bad stuff about her.  That’s not totally unreasonable, but an equally reasonable argument is that, given the hostility, Palin is more likely to sue the Times than a friendly politician.  Which means the Times is likely to be even more careful when writing a piece about her.  It would be natural for a publication to make sure “i”s were dotted and “t”s  crossed when the subject is more likely to sue.  I have always felt evidence of how the defendant feels about the plaintiff is irrelevant in an actual malice analysis.

And that is the view Judge Rakoff took.  As he put it, “it goes without saying that the Times editorial board is not a fan of Ms. Palin. But neither the fact of that opposition, nor the supposition that a sharp attack on a disfavored political figure will increase a publication’s readership, has ever been enough to prove actual malice.”  Hear, hear

STUPID IS AS STUPID DOES – $1.1 MILLION EDITION

CAMPUS SPEECH PART FOUR – It apparently does hurt to…