NO IMMUNITY FOR CELL PHONE SEIZURE 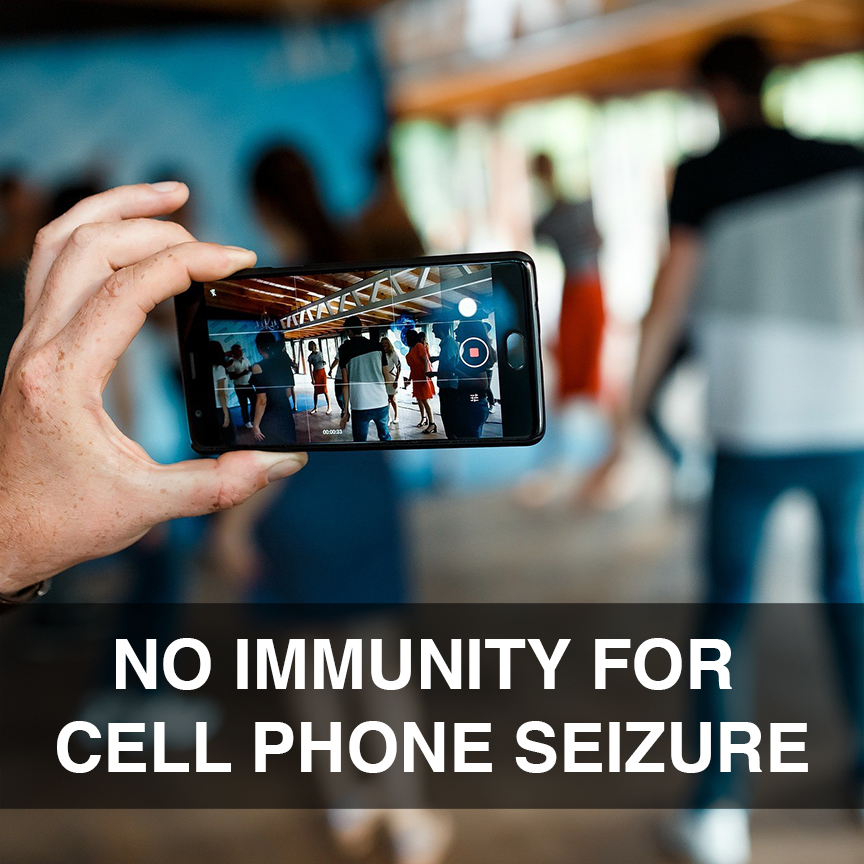 NO IMMUNITY FOR CELL PHONE SEIZURE

Cell phones and cell phone videos are everywhere.  And they are increasingly creating a new body of law, or at least a body of case law that deals with facts that simply didn’t exist before the emergence of this technology.

Video footage has been the subject of a number of public records disputes.  I am handling one currently before the Ohio Supreme Court.   As police departments increasingly employ body cameras, courts must determine when and if the footage needs to be released to the public.

The flip side of that coin, of course, is the question surrounding the public’s right to use cell phones to record police activity.  Most of the federal appellate courts that have considered the issue have concluded that the First Amendment guarantees the public’s right to film police in action (so long as the action takes place in public and the recording doesn’t interfere with the police discharging their duty).  Indeed, that issue is pretty much settled law as far as I can tell.

And the existence of that right begs the question – what right do the police have to seize the footage captured by a bystander?  A recent case from the 11th Circuit Federal Court of Appeals tells us that the police can’t arbitrarily seize the footage (or the cell phone) in the name of “evidence collection.”

In the case,  James Crocker was driving northbound on Interstate 95 in Martin County, Florida when he observed an overturned SUV in the interstate median that had recently been involved in an accident. Crocker pulled over on the left shoulder and ran toward the SUV. About fifteen other motorists also stopped to assist.

Crocker noticed some of the other bystanders were taking photographs and videos of the crash scene with their cell phones. Crocker took out his own cell phone, an iPhone, and proceeded to take photos and videos of the scene. He captured images of empty beer bottles, the overturned vehicle, and firemen, but no images of any persons involved in the accident.

According to Crocker, about thirty seconds after Crocker had started using his iPhone camera, Police Officer Steven Beatty walked over toward him, reached out from behind him without warning or explanation, and took the iPhone out of his hand. Crocker explained that he’d witnessed the accident and stopped to assist. He asked Beatty to return his phone, but Beatty refused.

Crocker filed a federal lawsuit, contending that Beatty had violated his Fourth Amendment right to be free of unreasonable searches and seizures.

Beatty defended his actions on the basis that “exigent circumstances” justified his actions and that he was immune from liability in any event.  The Court disagreed on both counts.

As to the seizure, Beatty claimed that he needed to seize the phone due to the risk that evidence of the crime was in imminent danger of being destroyed.  The court was skeptical of this claim for two reasons.  First, given that Crocker arrived on the scene and started filming after the accident took place, so it’s not clear he captured any evidence of a crime in the first place.

Second, there was no reason to assume Crocker was going to destroy the evidence.  As a mere bystander, he had no incentive to destroy the footage.  And to the extent Beatty contended that the “nature” of cell phones led to easy destruction of evidence, the court was concerned that this justification would lead to police regularly seizing cell phones “from any person, in any place, at any time, so long as the phone contains photographs or videos that could serve as evidence of a crime—simply because the “nature” of the device used to capture that evidence might result in it being lost.”  The court wasn’t willing to go there.

On the immunity issue, the question was whether Beatty violated a “clearly established right.”  If it’s grey area, Beatty would be immune from liability even if he violated the Constitution. If it’s black and white, though, he loses that immunity.

Here, the court felt the issue was more black and white than grey.  It noted “[o]ur case law has sent a consistent message, predating 2012 [the year this incident occurred], about the warrantless seizure of personal property and how exigent circumstances may arise. The technology of the iPhone simply does not change our analysis. To hold otherwise would deal a devastating blow to the Fourth Amendment in the face of sweeping technological advancement. These advancements do not create ambiguities in Fourth Amendment law; the principles remain as always. Because of this, Beatty is not entitled to qualified immunity.”

Likewise, a citizen has a right to be free from unreasonable searches and seizures.  Exigent circumstances aren’t determined by the format of the evidence, but rather by the motivation of the person who holds the evidence.  Transport that person with the cell phone back in time about 30 years and give them a 35 millimeter camera.  It would have been very easy for that person to pull the roll of film out and expose it (younger readers, ask your parents what I’m talking about).  And no one thought that created a right for cops to grab cameras on a whim.  Digital technology doesn’t change the fundamentals.  That’s what makes them fundamentals.