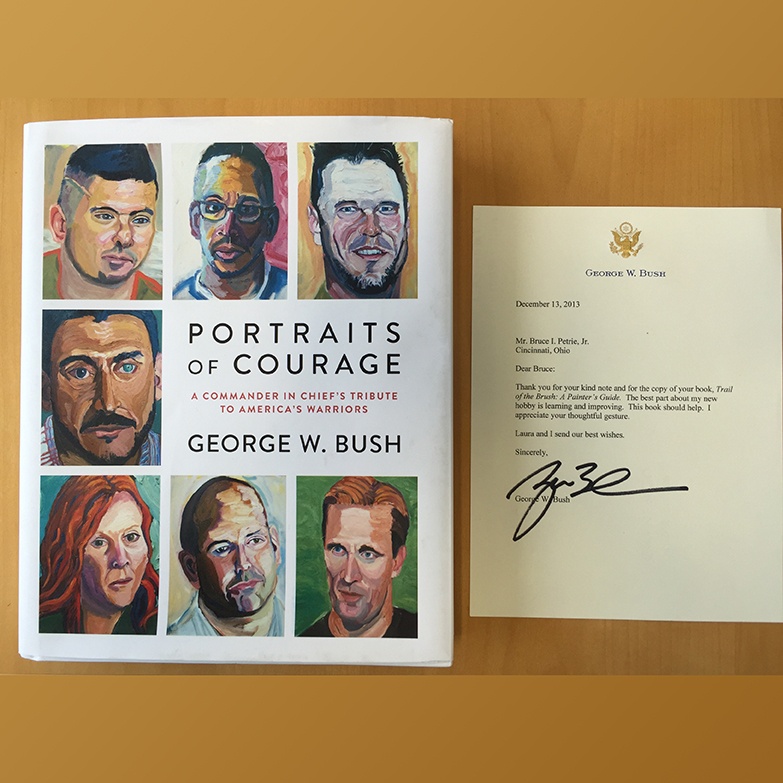 In his spare time, when not saving Western Civilization from Nazi domination, Winston Churchill never stopped doing that which helped recharge his relentless energy. He put on a long smock over suit and tie, a shade hat on his famous head, a cigar between his teeth, strolled outdoors with his mobile easel in tow, set out a blank canvas, squinted into the the landscape and with characteristic “audacity” put brush to paint. He called his dark times the “black dog,” and, to be sure, this greatest of warrior leaders had plenty of black dog times during World War II. As he wrote in his gem of a book Painting as a Pastime, painting helped the black dog go away.

Another Commander in Chief from another century is thus in good company when he has chosen, in retirement, to paint. George W. Bush’s bestselling new book Portraits of Courage: A Commander in Chief’s Tribute to America’s Warriors is a collection of portraits and profiles. Each original oil painting is displayed side-by-side with a first person tribute by the author/painter/president.  Many of the subjects have facial injuries from their service.  It’s difficult enough to paint a compelling likeness in oil without also facing the problem of how to paint a facial deformity.  But in the spirit of Churchill, the painter president has done so with an audacity and candor that integrates the subject, the condition and boldly-applied paint and color.

When the public first learned some years ago that President Bush had taken up painting, and especially after photos of some of his early work were hacked from his computer and spread around the internet, the first reaction from some corners was to criticize and mock.  At the time, in 2013, I wrote him a letter of encouragement and sent him a little book I’d written on painting as an avocation open to everyone.  He wrote me a kind letter back. I certainly take no credit for his progress as a painter. I wish I could, since his progress has been very impressive. His most recent book and work has that quality which serious painters–longstanding professionals with many more years of training–strive to achieve: that is, painting not just subject matter but content; saying something meaningful; connecting with a human condition, vulnerability or suffering; painting with honesty, feeling and insight.  Content beats style any day.

The painter-president still clearly carries the burden of decisions from the world’s most unforgivingly powerful public office.  Each citizen is free to decide for himself or herself how much citizenship to shoulder; how much service to do or honor in others; how much collective civic burden to carry or, in some cases, to disavow.  Here is a book, through paint and portraiture, that doesn’t look the other way and doesn’t blink; and that will convey to the appreciative reader a sense that we’re all in this together.