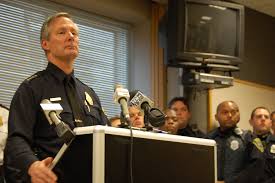 My wife occasionally has to put up with my rants.  These can be on any number of subjects that range from sports to music to politics.  The most recent rant she had to endure came this past Sunday while we were returning from a weekend getaway to Lake Geneva Wisconsin.  We were listening to the Milwaukee broadcast of the Reds/Brewers game (I had never actually heard a Bob Uecker broadcast – he is good, but not as funny as I hoped. He talks about food a lot).  In about the 5th inning, the station cut away to a press conference featuring Milwaukee Mayor Tom Barrett and Police Chief Ed Flynn discussing the events in Milwaukee following the officer involved shooting the previous afternoon.

Now, before I go on, it is important to say that I feel terrible for everyone involved – the victim’s family lost a loved one; the officer’s life will never be the same; and the city of Milwaukee is enduring violence and unrest.  It is tragic.  But I could not help but express my displeasure when Police Chief Flynn’s comments regarding the public’s access to the officer’s body camera footage.  The gist of the comments are that the footage will be released if and when the city feels like releasing it.  That is the same type of official gibberish we’ve heard in Ohio, where a case is currently pending on this issue before the Ohio Supreme Court.

Several comments particularly annoyed me.  At one point, Chief Flynn talked about how there has to be a “balancing act” between the investigation and “the public’s need to know.”  With all due respect to the Chief, it is not a question of the “need” know.  And the public and press shouldn’t be asked, and shouldn’t have to answer the question “why do you need to see it?”  The public has an absolute right to review the records of its public servants – especially those servants charged with the power to arrest and kill.  It’s not about a “need” – it’s about a right.  I don’t have to explain why I “need” to vote and I don’t have to explain why I “need” to see the footage.  Chief Flynn’s comment suggests a fundamental misunderstanding.

And I also noticed that while Chief Flynn justified his failure to release the footage because of the need to maintain the integrity of the investigation (or some other empty platitude) he never explained why release of the footage would adversely affect the investigation.   In my experience, if someone contends that there is a cause and effect relationship they really should be able to explain why they thinks such a relationship exists.  But the Chief, like so many others before him, is unable to explain why allowing the public to see what actually happened will in any objective way hamper the investigation.

And if he is so concerned about the integrity of the investigation, why did he describe what he saw on the footage and essentially clear the officer of any wrongdoing at the press conference?  If release of the footage is potentially fatal to the investigation, why is it okay to provide a detailed verbal description of the footage (and the still photos that Mayor Barrett described)?  The only difference I can see is that when the Chief gives his description without releasing the video, there is no way to meaningfully refute what he says.  Which means he gets to control the narrative.