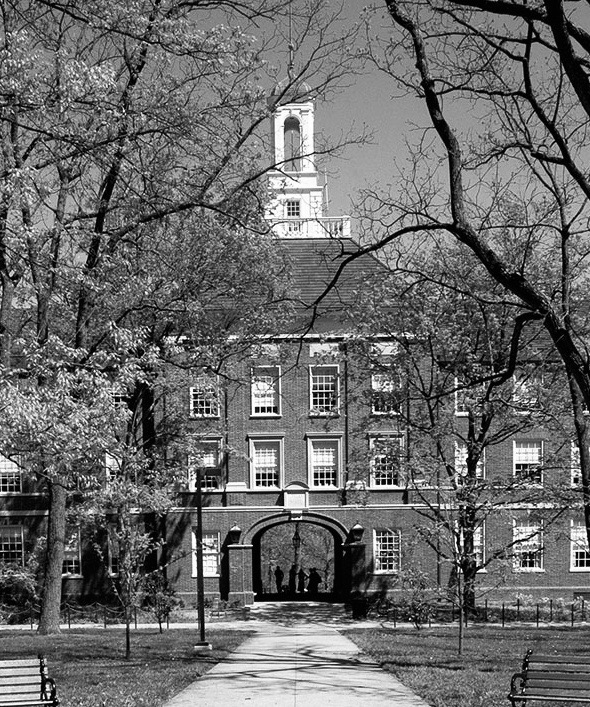 For many us in Southwestern Ohio, the drive from Cincinnati to Oxford is familiar; more so driving each Wednesday afternoon to teach a class of 18-21 year-olds at Miami. The drive, give or take a trafﬁc-dependent hour, goes from urban to rural, from Bearcats (top 4!!) to RedHawks, from city-scape on the Ohio’s banks to bucolic campus, along highways past aircraft engine assembly and a lunar scape landﬁll mountain, then rural roads running ﬂat and linear through ﬁelds of corn russet in late afternoon light. I turn off my phone, off NPR, stay quiet and think about our class conversation to come. Out the window are visual reminders of how wide-ranging our country is, how close and far away the urban-rural worlds are, how various the experiences and realities of some 330 million Americans.

For our “Constitutional Conversation” class we choose a different topic each week, no shortage these days in the news headlines. As we circle round our chairs, the three main ground rules are: 1)free speech 2) open listening and 3) constitutional text (we read it), law and principles rather than red vs. blue politics. Our class theme is about how to be a friend of the Constitution, e pluribus unum in deeply divided times. Can we start with a group of young citizens and in a small way, if only for a group of 20, build a more perfect union rather than a house divided against itself?

Our class last week was the same day of oral arguments before the Supreme Court in Dobbs v. Jackson Women’s Health Organization. Early predictions about Scotus outcomes can easily miss the mark, but there’s little doubt about how constitutionally monumental this abortion rights case may be after listening to the questions of Justices Roberts, Breyer, Alito, Thomas, Kagan, Sotomayor, Gorsuch, Kavanaugh, and Barrett. No single constitutional topic has for the last ﬁfty years stirred more controversy than abortion. So, I drove to class last Wednesday a little unsettled about the conversation to come. Would our undergrad-next-gen conversation stay on the constitutional track or run off the rails as abortion politics often do? I could tell from prior classes that the class was pretty evenly split (as the country is) along the pro-life vs. pro-choice spectrum.

Here’s a sampling of ﬁve main things we talked about:

1) The Who Decides Question. Constitutional questions often turn not just on “rights” but on the “who decides” question—courts or legislators. Abortion rights may, for a majority of Justices, become more about separation of powers: i.e. the legislative power to make law vs. the judicial power to apply and interpret law.

2) Don’t Forget Federalism. Related to (1) is the question of federalism, the role of the states. With so much national focus on DC and the feds, it’s easy to forget that the Constitution forms a national republic out of ﬁfty states each with its own state constitution and three branches separating powers. To what extent should abortion rights turn on the representative government of ﬁfty states via state legislatures, the elected lawmakers of each state, rather than the Article III unelected federal judiciary?

3) The Viability of Viability. Roe v. Wade set a “viability” standard for abortion rights (i.e. when a fetus can ‘independently live’ viably) rather than a number-of-weeks standard. The Dobbs case involves a 15-week standard: i.e. it bans abortions after the ﬁrst 15 weeks of pregnancy. Will a Scotus majority scrap the viability standard of Roe and okay a 15-week standard?

4) Stare Decisis. Whatever it decides, the Court will have to address the principle of stare decisis: i.e. the role of past precedent. Stare decisis has its own set of legal precedents that say when the Supreme Court should overrule past decisions of the Court. Scotus, in cases after Roe, changed Roe without expressly overruling Roe. For example, in the Casey case the Court created the so-called “undue burden” test: whether a state law creates an undue burden on abortion rights. Because Casey (and others) didn’t expressly overturn Roe, the Court created “precedent on precedent”. So how will a majority of Justices, if so inclined, change the viability standard to a number-of-weeks standard while also dealing with stare decisis? Sound like a Gordian knot?

5) Personhood. The Court in Roe said it was not saying when life begins. Nor did it rule a fetus is a “person”. Some have wondered whether the current Court majority may “go there” on the personhood question. After all, the Court has ruled that a corporation is a person under the Fourteenth Amendment. In other words, there is judicial precedent for creating personhood as a legal ﬁction for non-human entities, thus making it at least conceivable that a fetus could be deemed a person without deciding the biological/philosophical/religious etc. aspects of personhood. If we were to make predictions, there is reason to doubt (but who knows for sure?) that Scotus is ready to make such a monumental ruling on personhood alone.

There is plenty here for constitutional conversation and the students did well, stayed on track. Unlike the nine Justices, we didn’t have to decide a case and controversy. We could talk and listen to each other for a few hours without saying I’m right, you’re wrong, I win, you lose. It’s not my job to try to make up the minds of students for them on this hardest of constitutional topics, which in the end is not just about rules of law but involves profound questions of individual belief.

Being a friend of the Constitution in a small seminar for a few hours is only a place to start.

From there, the road goes on.