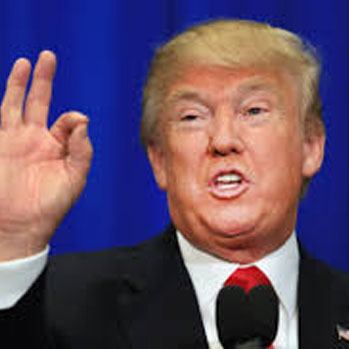 Donald Trump accepted the Republican nomination on July 21 accompanied by the classic rock anthem “All Right Now” by “Free.” One might ask if a song that is literally about a guy picking up a street walker for a one night stand is the most appropriate theme for this event. I could make an argument both ways. But this is not the editorial page.

What is more interesting to me is the now quadrennial spectacle of rock musicians complaining about presidential candidates using their songs without permission. As far back as 2008 Jackson Browne objected to John McCain’s use of “Running on Empty.” But Trump seems to lead the league in irritating the rock and roll world. I saw an article recently at alternet.org that listed six pretty high profile performers who’ve objected to Trump using their songs. The list includes the Rolling Stones (“Start Me Up, “You Can’t Always Get What You Want” – which was apparently played at the introduction of Mike Pence as Trump’s VP (I am not making that up) – and “Sympathy for the Devil”); Adele (“Rolling in the Deep” and “Skyfall”); Twisted Sister (“We’re Not Gonna Take It”); Neil Young (“Rockin’ in the Free World”); Steven Tyler (“Dream On”) and R.E.M. (“It’s the End of the World as We Know It”).

There are actually a few layers to this issue. The easiest may be the copyright question. That is kind of a black and white issue – the candidate either has a license to use the song or not. ASCAP, the industry licensing service, offers a “public performance license.” Assuming the candidate pays for that, there shouldn’t be a copyright issue. A license is a license. But as ASCAP itself notes in a recent press release, getting the right license may not end the issue. Artists have other legal avenues to pursue if they object to the use of the song. One is the right of publicity. While the right of publicity typically prohibits the unauthorized use of someone’s “image or likeness,” it’s possible the song is so identified with an artist that the use of the song is equivalent to the use of the image.

The Lanham Act prohibits the misuse or dilution of a trademark. Again, the use of a song so associated with a band – whose name is trademarked – could give rise to a claim.

Finally, there are laws that prohibit a “false endorsement.” Again, if someone hears a Stones song at a Trump rally, they may assume that the Stones are on the Trump band wagon. And to those readers who think no one in possession of their faculties would endorse Trump, remember, we’re talking about Keith Richards here.

This whole thing fascinates me. On one hand, if someone wants to use a song, and is willing to pay the license fee, the free market side of me thinks they should be able to do it. On the other hand, I can see artists feeling protective of their work. If the artists prevail – given the number of artists who have objected — that could be problematic for Trump. Unless Scott Baio learns how to play the guitar.

A gossip Web site that asks readers to rate whether news reports are “rumor” or “real” recently got hit with a judgment for copyright infringement. It’s another reminder just because materials are freely available on the Internet, they aren’t really free.

Two companies — BWP Media USA Inc. and National Photo Group – brought the lawsuit against “Gossip Cop Media.” According to the court, Gossip Cop operates a for-profit Web site that presents celebrity gossip news and opines on the veracity of celebrity news stories published by other news outlets. The suit involved Gossip Cop’s use of three photos — a photograph of the actors Mila Kunis and Ashton Kutcher walking down the street; a photograph of the actor Robert Pattinson slumped over in the seat of a car; and a photograph of the model Liberty Ross midstride, in which she appears not to be wearing her wedding ring.

Gossip Cop copied each of these photos from third-party celebrity gossip Web sites that had themselves licensed the images from the plaintiffs. Gossip Cop then posted “screen grabs” of the photos on its own site, adding to each an assessment of whether the story that accompanied the photo on the third-party Web site was “real” or “rumor,” as displayed on a real-to-rumor “scale” posted alongside the image.

The two plaintiff companies followed a similar business model – they bought photographs from free lancers and licensed them to news outlets. Gossip Cop, however, paid no fee for its use of the photos. The elements of the infringement claim were easily established – Gossip Cop used copyrighted material without permission. Gossip Cop’s lone defense was that its publication of the photos was a “fair use.”

Gossip Cop argued that in applying the “real or rumor” test to the photos, it “transformed” the copyrighted material. Whether a use is “transformative” is a legitimate question in the fair use context. So if I wanted to write a critique of a song or a book, I would likely copy portions of the book or lyrics in my critique. That is almost certainly a fair use. Here, Gossip Cop contended its use of the photos was transformative, as it used the photographs to comment on or critique the stories that originally accompanied those photographs. Sounds pretty reasonable in theory, right?

But the court was unimpressed. As it noted, “[t]he problem with respect to the three images at issue is that the usage described by Defendant does not accord with what Defendant actually did. Nowhere in its stories accompanying the Kunis/Kutcher or Pattinson Images does Defendant comment or report on the images in question, nor does it critique the source websites’ use of those photos. . . . Here, however, Defendant’s sole, self-proclaimed purpose in using Plaintiff’s images was as a means of commenting upon the veracity of third-party reports. The “new expression, meaning, or message” purportedly imbued by Defendant was a “debunking” of each source-website’s presentation of a given image; yet nothing in Defendant’s articles suggests that the images were misrepresented. A viewer could leave Defendant’s website believing that the third-party sites reported false stories, but without any idea that the images were in any way relevant to the deception.”

Essentially, the court found the photos added nothing to the “transformative” aspect of Gossip Cop’s use. They were sort of decoration. And that doomed the fair use defense.

The plaintiffs sought “statutory damages” – an amount set by the Copyright statute. If the court finds a willful violation, those damages can total up to $150,000. Here, the court determined that Gossip Cop honestly felt its use of the photos was protected by fair use, which was a mitigating factor. It awarded a total of $17,945, which was based on a multiple of the cost of a license for the photos. So Gossip Cop got off for less than it might have. The lesson, though, is that fair use is in the eye of the beholder. And you might be better off paying a four figure license fee upfront instead of a five or six figure penalty later on.