Tom Will Always Be Terrific

Tom Will Always Be Terrific

The family of Tom Seaver yesterday shared some very sad news. The Hall of Fame pitcher has been diagnosed with dementia and will not make any more public appearances.

I have no legal spin on this. I am just very sad.  Until 1977, Seaver was my dad’s favorite non-Red. But in June of that year, the Reds traded for him and that “non” distinction was dropped from the equation. Some years back, I published an essay about my dad’s abiding admiration for Seaver. It was entitled “Tom Seaver Almost Killed my Dad.” It described the night in April, 1971 when my dad sat through a Reds/Mets game at Riverfront Stadium suffering from an Angina episode, too stubborn to leave a game that Seaver was pitching.

When the essay was published, I reached out to some contacts and managed to get an address for Mr. Seaver. I sent him the publication and I got back from him not only an autograph, but a really nice note. My wife was kind enough to frame it for me and it occupies a cherished place on my office wall. 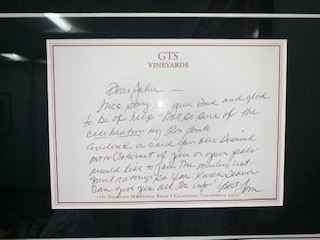 It was a truly kind and gracious gesture from a good man. My thoughts are with him and his family.

“‘WEED’ RATHER NOT RUN YOUR AD”

The Eye of the Trademark