TTB Accepts $900,000 Offer in Compromise from Warsteiner as it Ramps up Trade Practice Enforcement 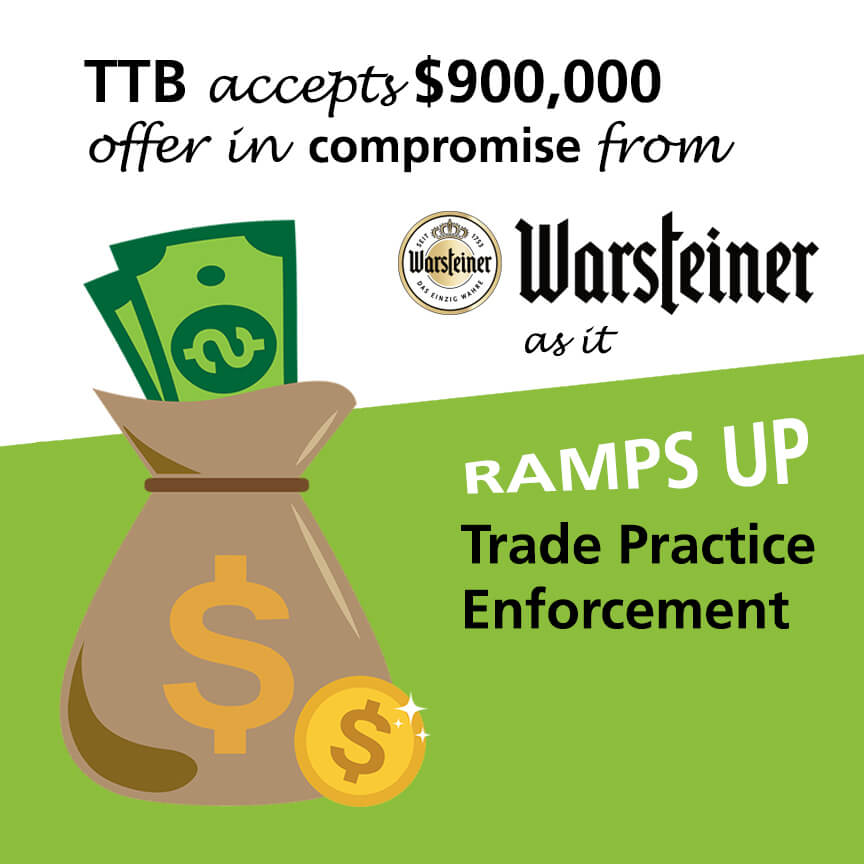 TTB Accepts $900,000 Offer in Compromise from Warsteiner as it Ramps up Trade Practice Enforcement

If you make or wholesale alcohol, then you certainly know the Alcohol and Tobacco Tax and Trade Bureau (or “TTB”).  The agency, which spun off from ATF in 2003, regulates all manufacturers and wholesalers of alcohol (including all breweries, wineries, and distilleries).  The federal regulation of the alcohol industry is largely driven by excise tax revenue; however trade practice enforcement has recently become a much larger part of TTB’s mission.

In May of 2017, Congress appropriated $5 million for 2018 and 2019 specifically for TTB’s trade practice enforcement.  The reasoning behind this appropriation is perplexing to say at the least.  One of the largest common complaints against TTB within the alcohol industry is that the agency is underfunded in its ability to educate and inform the industry.  Not once have I ever heard an industry member complain that TTB’s trade practice enforcement group needs more funding to investigate and impose penalties against the industry.

TTB’s stated mission on trade enforcement is to create a “level playing field”; however a common complaint is that a lack of industry education and enforcement for decades has created a level playing field of industry members who are confused by the rules.  Even the industry giants are not immune, which perhaps illustrates the larger problem.  As a recent example, Cincinnati-based beer importer Warsteiner Importers Agency Inc. recently settled for trade practice violations with TTB in the amount of $900,000.  TTB accused Warsteiner of several violations, such as “engaging in illegal tied house, commercial bribery and exclusive outlet violations committed in order to compromise a retailer’s independence.”

Reports indicate that Warsteiner paid for equipment for dedicated tap lines in a so-called “pay-for-play” arrangement with retailers, such as taverns and bars.  Warsteiner also allegedly paid for or sponsored events in exchange for exclusivity for its products, meaning other beer companies were not allowed to sell their products at those events.  The alleged violations occurred from January 2015 through April 2018.  Warsteiner did not admit any liability or wrongdoing in its Offer in Compromise.

One need only look to the past few years to see how common these violations are.  In 2016, Anheuser-Busch paid $300,000 in an Offer in Compromise to TTB for trade practice violations, and Boston-based Craft Beer Guild paid $750,000 for alleging paying slotting fees and furnishing “things of value” to retailers.  In 2015, MillerCoors made an Offer in Compromise of $450,000 to TTB for trade practice violations regarding its “buy-back” program.

It is difficult to determine the basis of these settlement numbers without knowing the facts of the case, however TTB generally assesses penalties “per occurrence”, which is a phrase they can take pretty liberally.  And as the ultimate punishment of permit suspension or revocation looms over the heads of industry members, making an Offer in Compromise is often a much more appealing option.

The bottom line is that any industry member regulated by TTB should have a compliance plan in place.  There are even a number of industry attorneys and consultants who will conduct “mock” TTB audits of your facility for a cost much lower than an Offer in Compromise to keep your permit.