You Improperly Excluded an Employee from Your 401(k) Plan- Now What? Part 3: IRS Exceptions 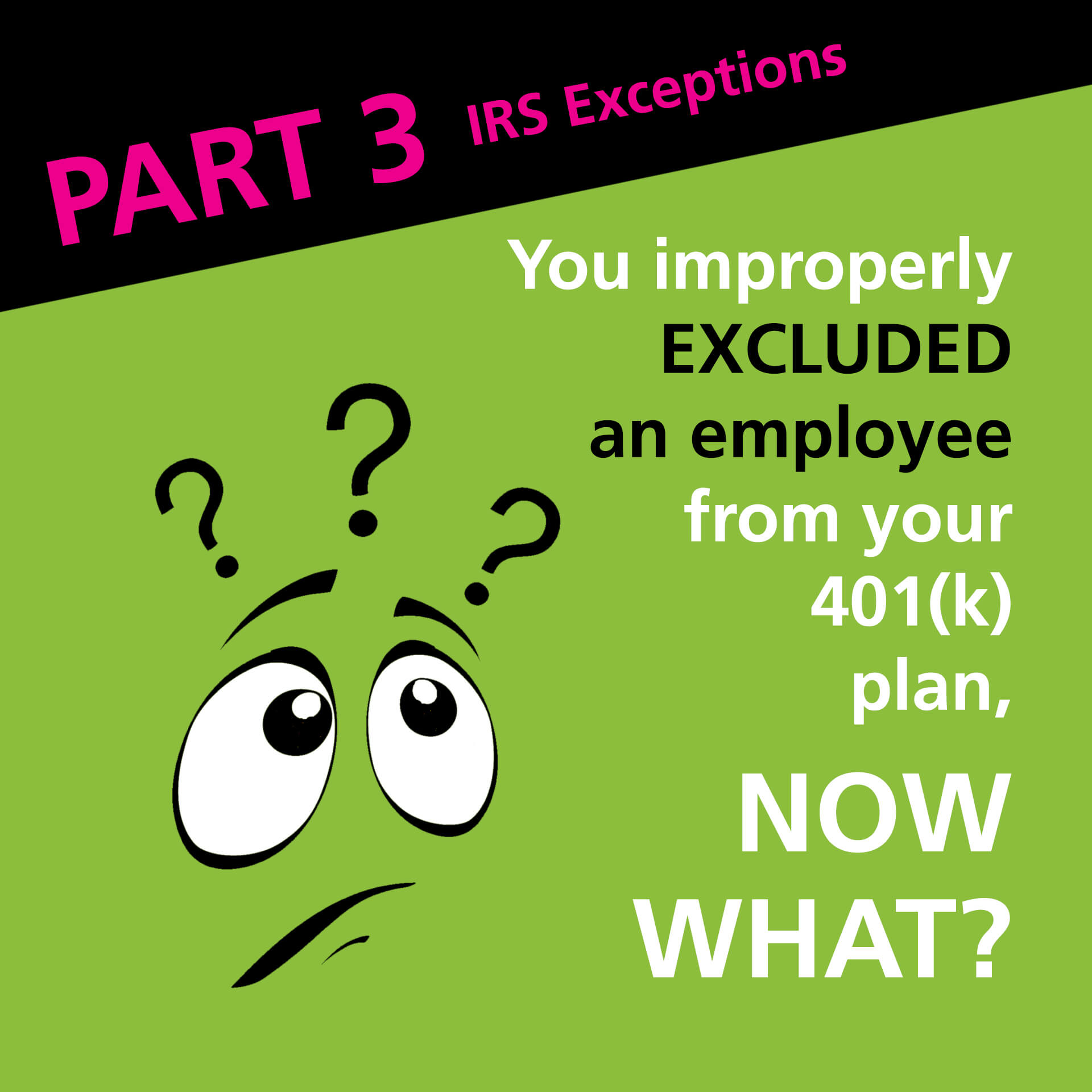 You Improperly Excluded an Employee from Your 401(k) Plan- Now What? Part 3: IRS Exceptions

Our original blog post explained that the correction procedures for an elective deferral failure included the employer making a contribution equal to 50% of the employee’s missed deferral, but noted that the percentage contributed could be reduced to 25% or 0% if one of the IRS exceptions apply. It is now time to discuss those exceptions and find out when an employer can make a smaller corrective contribution. We will continue to illustrate the required contributions through the example of Karl and ABC Company.

The first exception completely eliminates the QNEC for the missed deferral opportunity, and is for employers that find and make a correction within 3 months of the initial failure or no later than the first payment of compensation made on or after the end of the month following the month of notification if notified of the failure by the employee sooner. To illustrate, again assume that ABC Company hires Karl late in 2017, and Karl should have been eligible for the 401(k) plan on January 1, 2018. The plan operates on a calendar plan year, is subject to ADP testing, and provides for a matching contribution of 100% up to the first 4% of compensation. Further, the ADP for Karl’s employee group for 2018 was 3%, and Karl’s annual compensation was $100,000. But now assume ABC did not defer any of Karl’s compensation until the mistake was recognized by ABC and corrected in the first pay period of March.

ABC Company can correct this failure without making a contribution for Karl’s missed deferral opportunity because the failure was corrected within three months of the initial failure and before Karl notified the plan of the problem. But to use this correction method, ABC must also contribute the missed matching contribution and comply with notice requirements discussed below.

The second exception reduces the QNEC for the missed deferral opportunity from 50% to 25% of the missed deferral, and can be used by employers that find and make a correction within the 2-year window of the SCP correction period for significant failure or no later than the first payment of compensation made on or after the end of the month after the month of notification if notified of the mistake by the employee sooner. Again, assume that Karl’s situation is the same as above, except that the mistake was found and corrected after a full year of failure.

The final requirement that ABC Company must satisfy is the notice requirement. ABC must provide a notice to Karl no later than 45 days after the date on which the correct deferral begins. The notice must contain general information relating to the failure, a statement that the appropriate amount will now start to be deducted from Karl’s compensation, a statement that Karl can make an affirmative election to change his deferral amount, a statement that the missed matching contribution has been made, and details about how to contact the plan.

Have You Checked Your Plan’s Definition of Compensation Lately?