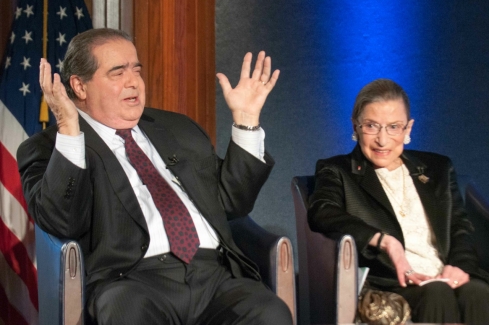 On Saturday, after the sudden news of Justice Scalia’s death, I watched two previous C-Span interviews with him, one just him and the other with Ruth Bader Ginsburg.  The interviews showed two sides of Justice Scalia. In the just-Scalia interview, his earnest defense of his judicial philosophy of originalism/textualism caused the interviewer to ask why he seemed “angry” when discussing the Constitution. Justice Scalia said he wasn’t angry, just “impassioned”.

By contrast, in the Scalia interview with Ruth Bader Ginsburg, the other Scalia came forth: the sense of humor, the friendship with “Ruth and Nino,” their mutual love of opera, the passion for Constitutional ideas, a willingness to admit mistakes by each of them. Here were two friends brought together in Constitutional Conversation, the Catholic son of Italian immigrants and father of nine and the Jewish legal icon committed to the rule of law and the equal rights of women. One is called conservative, the other liberal. Yet the two friends said they agreed on many things as judges.  And they had a wonderful give and take over the Constitution, able to agree to disagree, sharp minds at work, not only respecting each other but clearly enjoying the talk and the friendship.

Even before the civilities of funeral and family are fully observed, politicians right and left are drawing the political battle lines over Justice Scalia’s replacement. Article Two  vests the nominating power with the President and the “advice and consent” power with the Senate. Ahead will be Presidential nomination(s), Judiciary Committee hearings, Senatorial vote(s) and potential filibuster by those who want to run the clock for say a year until a new President can nominate. That’s not just the clock running: that’s a year of important cases and controversies in front of the Court.

Presidential politics will sharpen the ideological knives on both sides; the divides of special interest partisanship will be on full display. But here’s the real challenge. America needs another Justice, a man or woman devoted to the rule of law in a Constitutional democracy, not to political ideology.  The Constitution cares about that rule of law more than politics; the Constitution never mentions political parties and doesn’t guarantee their existence.

The Arts and Patriotism