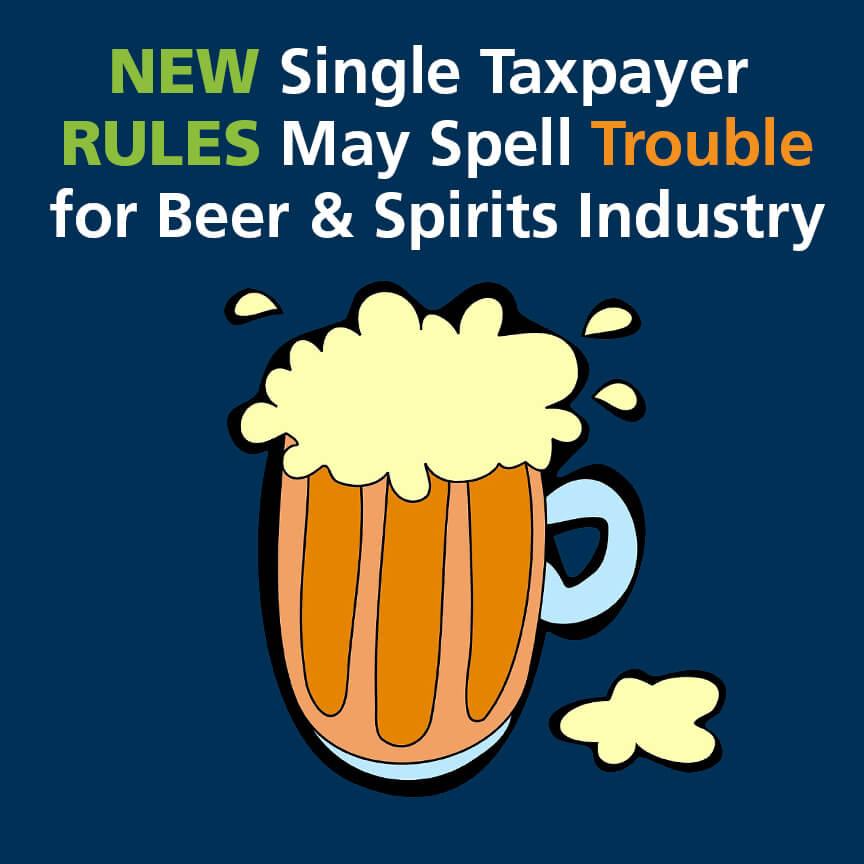 On January 1, 2018, the Tax Cuts and Jobs Act of 2017 went into effect, causing quite a stir in the alcohol industry.  The portions of the Act that have likely received the most attention in the industry are the tax cuts for breweries and distilleries.  Small producers of beer received a 50% tax cut on the first 60,000 gallons per year, and all distillers received an 80% tax cut on the first 100,000 proof gallons per year.  Although the tax cuts apply only for calendar years 2018 and 2019, it is widely expected the cuts will be renewed.

However, another part of the Act that pertains to beer and distilled spirits has gone largely unnoticed but it could spell a degree of trouble for the industry.  Effective January 1, 2018, the federal government will treat two or more entities – whether or not under common control – that produce distilled spirits and/or beer “marketed under a similar brand, license, franchise, or other arrangement” as a single taxpayer for purposes of federal excise taxes.

First and foremost, further guidance will be needed from the Alcohol & Tobacco Tax & Trade Bureau (or “TTB”) before we know how this rule will be applied.  At this point, there are more questions than answers.   The statutory language appears vague but it also appears to indicate that any entity that franchises its brand will be forced to share its small producer rate (or in the case of distilled spirits, first 100,000 proof gallon rate) with the franchisee entity.

For example: ABC Brewery has built a successful brand as an independent craft brewery.  The brewery is a small producer according to the federal government (i.e. they produce less than 2 million barrels per year) and they produce and pay excise taxes on 50,000 barrels per year.  Based on the new tax law changes effective this year, ABC Brewery will owe $3.50/barrel in federal excise taxes on all 50,000 barrels (a total of $175,000 in federal excise taxes for 2018).

Now consider this same scenario, but where ABC Brewery has agreed to franchise its brand with a different brewery, XYZ Beer Co.  Both breweries are independently owned and operated as far as the IRS is concerned, however XYZ Beer Co. makes 50,000 barrels per year as a small producer and has authorization to use ABC Brewery’s brand for its beers through a franchising agreement.  We’ll even assume in this scenario that XYZ Beer Co. has developed its own line of seasonal and limited release products which are all marketed as and labeled under “ABC Brewery”.

The rude awakening may come as breweries and distilleries who have unknowingly engaged in this otherwise accepted practice are served with an updated tax bill, and then have to agree with their franchisee business partners as to how to split the bill.