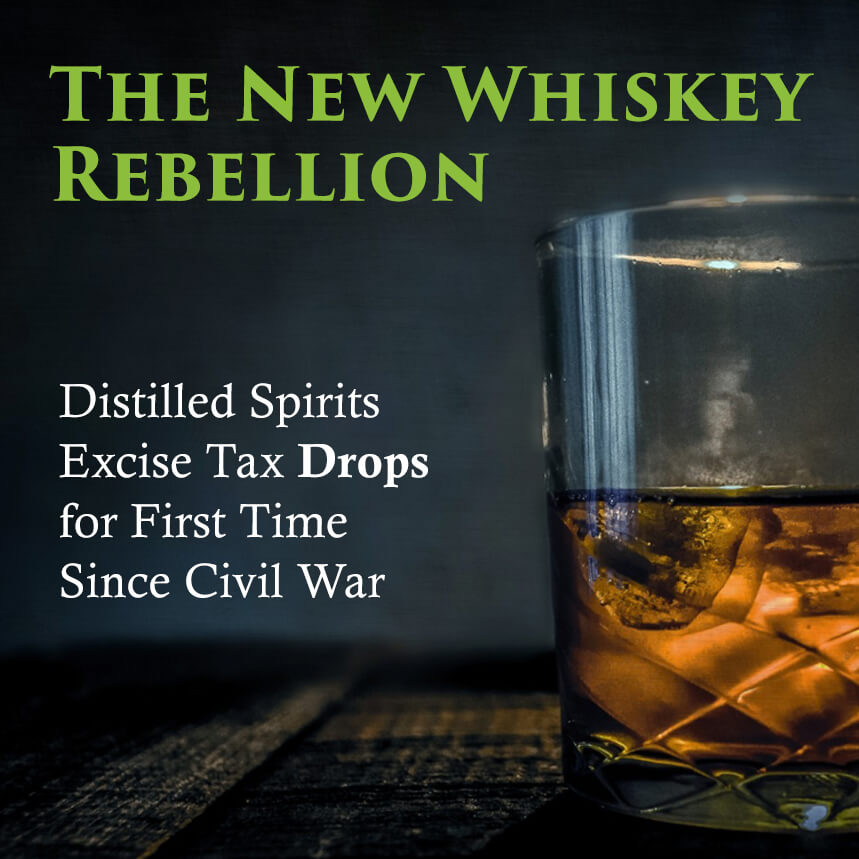 In the landmark Supreme Court case McCulloch v. Maryland, Chief Justice John Marshall famously wrote that the “power to tax involves the power to destroy”.  Although the case was decided in 1819, the quote remains a highly cited one, especially today.  Perhaps one of the best illustrations of this quote is the history of alcohol taxation and the Whiskey Rebellion.

I was at a craft distilling conference last spring when I heard something that caught my attention; the Federal Distilled Spirits Excise Tax had not been reduced since the Civil War.  Excise taxes are nothing new, especially for the liquor industry.  In fact, the first excise tax in the U.S. was for distilled spirits.  It was referred to as the “Whiskey Tax”, as whiskey was by far the most popular spirit of the era.  The year was 1791, and our nation was in its infancy.  We had just won independence against our overbearing and overtaxing British parents.  Although the war was a success, it was also expensive, and the new federal government was already saddled with a large debt to pay off.  So President Washington, himself a General in the Revolutionary War, signed the “Whiskey Act” in hopes to help pay off the debt.

The Whiskey Tax was immediately controversial, especially among citizens living in the Appalachian regions of the country.  The distillers in these regions felt slighted by the tax for a number of reasons.  First, many of these distillers were small, independent farmers who could not compete with the economies of scale of the larger industrial distilleries along the Eastern Seaboard.  Further, whiskey sold at a much lower price in the rural Appalachian region due to a weaker economy.  As a result, the profits of the smaller distillers in Appalachia were more severely affected.

Second, and perhaps most importantly, the Appalachian distillers relied heavily on selling whiskey as an efficient means of selling their crops.  Living in the mountains made it difficult to transport large bags of corn to the market; however, distilling corn mash into bottles of whiskey was a very efficient way to do so.  Thus, while the Whiskey Tax may have been an inconvenience on the large distilleries of the East Coast, it had devastating economic consequences on the rural farmers of Appalachia.

The law also required that every still in the country be registered, a law that is still on the books today.  If a still was unregistered, anyone cited was required to appear in Federal Court, which was typically hundreds of miles from most Appalachian distillers.  Lastly, many of these farmers had fought in the Revolutionary War, a war that was largely based on rebellion to over-taxing, and many of them were still armed with firearms and the memory of unfair taxes.  It was only a matter of time until the tensions boiled over and a revolt ensued.  Though the rebellion was short lived and the casualties were few, the historical impact was significant in demonstrating the federal government’s ability to collect taxes even in the face of violent resistance.  In the years since the Whiskey Rebellion, a lot has changed in the alcohol industry.  Prohibition came and went, and today small independent distilleries have approximately only 2% of the market share.

Before the Tax Cuts and Jobs Act of 2017 was made effective on January 1, 2018, the Federal Excise Tax on distilled spirits was $13.50 per proof gallon across the board.  A “proof gallon” is one liquid gallon of spirits that is 50% alcohol at 60 degrees Fahrenheit.  To put this in perspective, the Federal Excise Tax for a 750 ml bottle of 80 proof (40% ABV) spirits was $2.14 per bottle until this year.  It is with great irony that a relatively unpopular tax reform bill included tax relief for an increasingly popular industry.  In an effort to aid the craft spirits industry, distilleries will now receive a reduced Federal Excise Tax rate of $2.70 per proof gallon on the first 100,000 proof gallons for calendar years 2018 and 2019.

For much of our history since the repeal of Prohibition, the federal government has treated distilled spirits quite a bit harsher than its beer and wine counterparts.  First, it has been taxed significantly higher per serving than beer or wine.  Based on the pre-2018 Federal Excise Tax rates, the default tax rate for a 12 oz beer was approximately $0.05 per serving ($18/barrel containing 31 gallons of beer), a 5 oz glass of standard wine was taxed at $0.06 per serving (based on 14-21% ABV taxed at $1.57 per gallon), and a standard 1.5 oz pour of liquor was taxed at approx. $0.13 per serving ($13.50 per proof gallon, assuming an 80 proof drink).  The above information does not account for the various small producer rates which beer and wine producers were able to take advantage of, which has not existed for distilleries.

Additionally, up until the late 1970’s, the ATF (the predecessor agency of the Alcohol & Tobacco Tax & Trade Bureau or “TTB”), required that all distilleries had an ATF employee, referred to as a “gauger”, maintain an office inside the distillery.  These gaugers inspected the premises, checked the product for alcohol content, and were the only ones with keys to the building.  That is not a typo; if you ran a distillery, the ATF had to unlock the doors and let you in every morning.

For decades, the small and independent craft spirits industry has been largely ensnared in the same red tape as the large institutional distilleries.  This outdated model of regulation has accounted for what many perceive to be a high barrier to entry in the market, which arguably explains an approximate 2% of the market share versus the craft beer industry which holds approximately 12-13% volume share of the beer market.

However, the new reduced Federal Excise Tax rate appears to represent a turning point for the niche industry.  Although all distilleries, regardless of size, will qualify for the new reduced rate of $2.70 per proof gallon on the first 100,000 gallons (a potential annual tax savings of $1,080,000.00), I anticipate that small distilleries will realize the most benefit, as narrow profit margins will turn into opportunities for growth and expansion.

As an attorney who primarily serves the craft spirits industry in federal tax and regulatory matters, I believe we are witnessing the start of something very significant and something more than just tax cuts for a niche industry.  I believe we are seeing the momentum of a burgeoning craft spirits market, driven by consumer preference and a new Whiskey Rebellion.  Unlike the previous rebellion, this one will be consumer-driven against the large institutions and international conglomerates which have dominated the industry since Prohibition, and will now be aided by federal tax cuts.  However, much like a quality Bourbon, the craft spirits industry will likely take years to fully mature.  In the meantime, I recommend we all do our parts in getting to know a local craft distillery, learning their story, and enjoying a new and different drink.